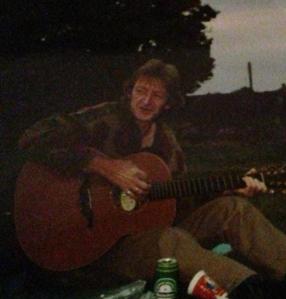 “All that you take with you is what you leave behind“.

That’s something I first heard, of all places, on an episode of Star Trek. Its probable origins are in the quote below.

“All you take with you when you’re gone, is what you leave behind” – John Allston.

Ten years ago or so, a young friend of mine died in a car accident. I was one of the last people to see him alive and I came on the scene afterwards. His parents and siblings relied on me, just a bit, for a while afterward and his dad really liked that Star Trek quotation.

I’ve been thinking of that a lot lately.

A few months ago, I heard an old friend had been diagnosed with lung cancer and I went to visit him in hospital. Having just been told his cancer was terminal, he was in understandable shock and despondent, barely responsive. We both did our best but we didn’t really have much of a chat. I saw him again three weeks later and he was a skeleton with skin and hair. I would have done anything not to see him like that. Less than a week later he was dead.

The cancer ate him alive.

He wasn’t my close friend. It was more like he was part of the architecture of my life. He was one of the warmest, wittiest people I ever met, a heroic figure all through the extended adolescence which was our lives for a quarter of a century. If he liked you, he’d call you Elvis. As in “How’s it going, Elvis, kid?” He was ten years older than me and a million miles cooler than me and as I got older I realised he wasn’t ageing. His hair never greyed and it stayed shoulder-length. The only nod to changing fashion was that the Zonker Harris moustache came off in later years.

I got older and he stayed the same. He was the most stress-free human being I’ve known and he exuded such a calm that he defused fights just by walking into a room. Don’t get me wrong – he was no saint, no more than anyone is. “That does it!” he once bellowed, “If I don’t get laid tonight, I’m invading Poland!”

A man who loved his music, a man who breathed his music, his version of Tupelo Honey was even sweeter than Van’s. He had a huge talent and he wore it very lightly. He would swear up and down to you that there were actually no lyrics at all to the Rolling Stones’ “Get Off My Cloud” and then he would stick one bent wrist on his hip and the other in the air and launch into a pitch-perfect impression of Mick Jagger, mincing and flouncing while shouting mumbly nonsense-words for the lyrics. Funniest thing I’ve ever seen.

I keep expecting to see him, striding down the street or bounding over the bridge. I used to meet him when I’d be driving home from work. He’d be coming from the pub and I’d give him a spin the three miles out the road to his home-place. We’d talk about Dylan or Santana or that time we met up at a Steely Dan gig in Dublin twenty years ago. A kid had died at a recent rave and the security people were taking no chances. Anyone standing up was forced to sit back down, until a dismayed Donald Fagen begged them “Hey man, let the people dance, man!”

Which, of course, became our private catch-phrase.

I’ll tell you this much, he would have got some laugh from his own funeral. The priest, a well-meaning bluffer, had never seen my friend in a church in his life and thus had no earthly idea who he was. To be fair to him, the poor sky-pilot had very little to work with and he gave a sermon the late Father Trendy would have thought twice about delivering, crowbarring the old product-placement of God into the story as best he could.

It didn’t matter. We raised the roof singing “Forever Young” and nobody ever got a better send-off. Klingon warriors get weaker wakes and if I could say that to him now he’d crack up laughing. He’d call me Elvis and he’d say “Klingon warriors? Klingon fucking what? Here, Elvis, kid, are you on fucking drugs or what?!”

That Allston quote above is great and the Star Trek is brilliant too, but that said, old Pericles was on to something too:

“What you leave behind is not what is engraved in stone monuments, but what is woven into the lives of others.“

A few weeks ago, I heard a cover band, a cover Band, play “Forever Young” and tears rolled down my face.

Tom Dot Com. Founder of the Gramoxone Party. One foot in the groove.

We miss you terribly. Do me a favour, Tom, and put in a good word for me with the King. And don’t ever forget what you left behind.