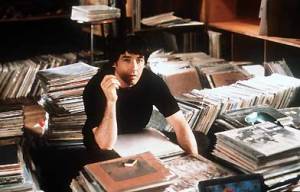 “Some of my favourite songs: ‘Only Love Can Break Your Heart‘ by Neil Young; ‘Last Night I Dreamed That Someone Loved Me‘ by the Smiths; ‘Call Me‘ by Aretha Franklin; ‘I Don’t Want To Talk About it‘ by anybody. And then there’s ‘Love Hurts‘ and ‘When Love Breaks Down‘ and ‘The Speed of the Sound of Loneliness‘ and ‘She’s Gone‘ and ‘I Just Don’t Know What To Do With Myself‘ and… some of those songs I have listened to around once a week, on average (three hundred times in the first month, every now and again thereafter), since I was sixteen or nineteen or twenty-one. How can that not leave you bruised somewhere? How can that not turn you into the sort of person liable to break into little bits when your first love goes all wrong? What came first, the music or the misery? Did I listen to music because I was miserable? Or was I miserable because I listened to music? Do all those records turn you into a melancholy person?

“People worry about kids playing with guns, and teenagers watching violent videos; we are scared that some sort of culture of violence will take them over.  Nobody worries about kids listening to thousands – literally thousands – of songs about broken hearts and rejection and pain and misery and loss. The unhappiest people I know, romantically speaking, are the ones who like pop music the most; and I don’t know whether pop music has caused this unhappiness, but I do know that they’ve been listening to the sad songs longer than they’ve been living the unhappy lives.”